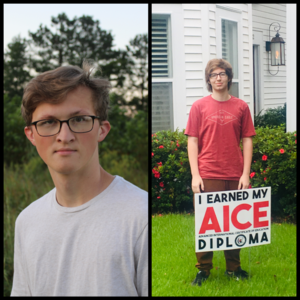 Representing less than 1% of U.S. high school seniors, the semifinalists include the highest-scoring entrants in each state. Over 1.5 million juniors entered the National Merit Scholarship Program by taking the PSAT/NMSQT which served as the initial screen of program entrants.

Both seniors were pleased when they received this honor. “It feels surreal to be selected among a group of only 16,000 students in the nation. I’m ecstatic to have accomplished such a monumental feat,” said Will. Cannon agrees with the sentiment. “I was very surprised when Dr. Barnett told me that I was a semifinalist and was even more surprised when I learned that only 16,000 students were chosen for the title,” said Cannon.

In addition to this distinction, Will and Cannon have achieved many academic awards and participated in leadership and service opportunities throughout their high school careers.

Will received the Advanced International Certificate of Education (AICE) diploma with merit. He is also a member of the National Honor Society, Mu Alpha Theta, the Corinth High School (CHS) Academic Team and the All A Honor Roll. Involved in the Corinth Theatre-Arts, he has performed in over 30 stage productions. As a member of the CHS Band, he went to the Mid-South Honor Band and NEMBDA honor band for bassoon. Will has also earned 71 merit badges in Boy Scouts, achieving the rank of eagle scout. Recently chosen as a Corinth Rotary Club Student of the Month, Will volunteers for several civic organizations.

In college, Will plans to pursue a biology major on a pre-medicine track. His time at CHS helped prepare him for this competition and for the future. “CHS put me on an academic route to tackle challenging curriculums and coursework. Its Cambridge structure put an emphasis on writing and project-based learning, encouraging practical application of knowledge and an environment conducive to future university classes. I acquired a foundation of education in the core subjects that will continue to impact my capabilities and world view,” said Will.

Cannon has also received the AICE diploma with merit. As a member of the CHS Band for six years as a percussionist, he was the percussion captain for two years. Additionally, he is a member of the Science Club, Mu Alpha Theta, National Honor Society and the Robotics Club. He is also a Cambridge AS Level Scholar and on the All A Honor Roll. In addition to being chosen as a Corinth Rotary Club Student of the Month, Cannon has helped guide participants through the school’s Warrior Olympics, helped with the Coke 10K and delivered gifts to the senior center.

In college, Cannon plans on taking pre-medicine courses with the goal of becoming a doctor. “I am very interested in science, primarily in chemistry and biology, and would love to be able to study those subjects while also solving other peoples' problems,” said Cannon.

With his time at CHS, he feels prepared to tackle his college assignments. “CHS has given me an education that will help me excel through college, and has prepared me for any challenges that I'll face there. I have stayed up late on multiple occasions to try and get assignments done by their due date, especially in Global Perspectives, and I've managed to keep my grades high. So, I should be ready for any big project college gives me,” said Cannon.

Corinth High School congratulates Will and Cannon on these exceptional honors and wishes them all the best as they continue to compete for National Merit Scholarships this spring.